Mr Eazi has revealed what will to his girlfriend Temi Otedola after they get married and social media can’t keep calm about it.

Although it’s what we all know will happen, the way Mr Eazi dropped the hint on social media suggested that they are planning the occasion already.

Temi Otedola had first posted a tweet on her socials, where she  reintroduced herself to the public. She wrote;

Mr Eazi retweeted the post and also added his last name to hers, indicating that it will be a nice addition. 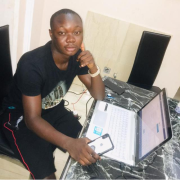